This document defines the semantics for the key order handling paradigms of the FIX application layer related to the ExecutionReport(35=8) message. The semantics are mainly driven by only two FIX fields as follows:

The various scenarios are grouped as follows and primarily reflect the different events that could occur during the lifetime of an order.

A – Order executions (aka Vanilla)

Many of the events change the quantity fields of an order. The main fields shown in the scenarios are as follows:

An order can be in more than one state since the owner was last informed. The precedence rules governing the setting of OrdStatus(39) are defined in Chapter 2 Order State Precedences. The first set of scenarios set out in Chapter 3 General Order State Change Matrices are of general nature and are not limited to a specific environment or asset class. A much smaller set of scenarios is defined in Chapter 4 Order State Change Matrices for Exchanges. They mirror general scenarios but define a different workflow specific to exchanges and other electronic trading venues. The key difference is the reduced verbosity of workflows, i.e. less messages are used to convey the same amount of information on an order.

In an ExecutionReport(35=8) message OrdStatus(39) is used to convey the current state of the order. If an order simultaneously exists in more than one order state, the value with highest precedence is the value that is reported in OrdStatus(39). The order statuses are as follows (in highest to lowest precedence):

The following matrices are included to clarify the sequence of messages and the status of orders involved in the submission and processing of new orders, executions, cancel requests, cancel/replace requests and order status requests. The matrices have been arranged in groups as follows.

C.2 Replace not for quantity change

The table below shows which state transitions have been illustrated by the matrices in this section (marked with an asterisk). The row represents the current value of OrdStatus(39) and the column represents the next value as reported back to the buy-side via an execution report or order cancel reject message. Next to each OrdStatus(39) value is its precedence – this is used when the order exists in a number of states simultaneously to determine the value that should be reported back. Note that absence of a scenario should not necessarily be interpreted as meaning that the state transition is not allowed:

B.1.d – Cancel request issued for an order that has not yet been acknowledged

NOTE: It is important to note that rejecting a cancel request for an unknown OrigClOrdID(41) does not cause the sell-side to consume the OrigClOrdID(41) used in the OrderCancelReplaceRequest(35=G).

C.2 Replace not for quantity change

C.2.a – Cancel/replace request (not for quantity change) is rejected as a fill has occurred

D.2.a – One cancel/replace request is issued followed immediately by another – broker processes sequentially

D.2.b – One cancel/replace request is issued followed immediately by another – broker processes pending replaces before replaces

D.2.c – One cancel/replace request is issued followed immediately by another – both are rejected

D.2.d – One cancel/replace request is issued followed immediately by another – broker rejects the second as order is pending replace

E.1.d – Unsolicited reduction of order quantity by sell side ( e.g. for US ECNs to communicate Nasdaq SelectNet declines)

E.1.e – Unsolicited cancel of a ‘cancel if not best’ order

E.1.f – Order is sent to exchange, held waiting for activation and then activated

F.1.c – Order rejected because the order has already been verbally submitted

Note that the sell-side may employ a number of mechanisms to detect that the electronic order is potentially a duplicate of a verbally passed order, e.g. :

G.1.b – Transmitting a CMS-style “Nothing Done” in response to a status request

H.1.b – GTC order with partial fill, a 2:1 stock split then a partial fill and fill the following day

I.1.b – Immediate or Cancel order that cannot be immediately hit

J.1.a – Filled order, followed by correction and cancellation of executions

J.1.b – A canceled order followed by a busted execution and a new execution

L.1.a– Transmitting a guarantee of execution prior to execution

The ExecType is used to identify the purpose of the execution report message. The value of ExecType will typically be New to convey the fact that a new order has been received and processed. However, the value of OrdStatus in this initial response may not necessarily be New as the order might have been executed immediately. The initial value of OrdStatus can therefore also be Partially Filled or Filled. It can even be Canceled if the order has time in force values such as Fill or Kill and Immediate or Cancel and the order could not be executed immediately (and in its entirety in case of Fill or Kill).

The following diagram illustrates the complete set of state transitions recommended for electronic exchange/ECN environments. The dotted lines lead to initial order states other than New and apply to cases where an order does not simply rest on the order book after having been accepted by the exchange/ECN. It is a possibility aimed at increasing performance by reducing the overall number of “Execution Report” messages that need to be provided and processed. Message flows with explicit messages to convey the order state New are equally possible. 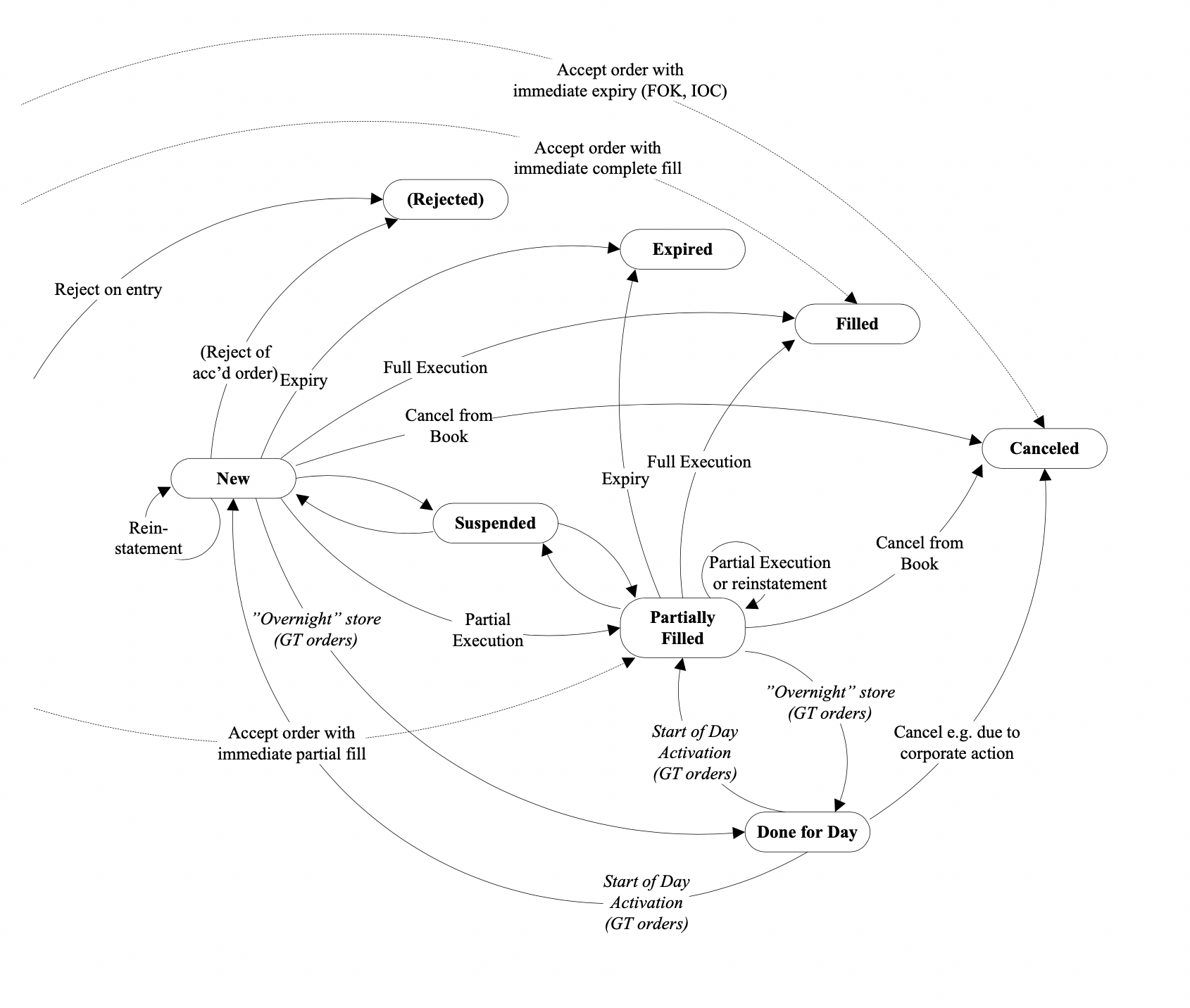 I.1.a – Fill or Kill order that cannot be filled