For decades, there have been improvements in technology which target front end FX trading. Trading FX, however, is largely bespoke in its implementation, and presents an integration hurdle. Furthermore, the lack of standardisation is time-consuming and costly; broad changes such as MiFID II were adapted across a sea of implementations costing tens of thousands of dollars for buysides, sellsides and platforms alike.

Additionally, regulatory and market pressures have created a more fragmented FX market, which already has a variety of liquidity sources adhering to a number of different standards, making it difficult for market participants to measure the effectiveness and value of their sources.

When speaking with my colleague Melissa Marquis at FIX Trading Community who is co-chair of the FX post-trade working group and Managing Director at Wellington Management, she said, “MiFID II and the Global Code of Conduct have been important forces to drive the conversation around transparency and efficiency, but there is still a lot of work that needs to be done to create a harmonious FX post-trade landscape.”

It is true that the Global Code of Conduct, which officially launched in May 2017, offers 55 principles which address major issues from ethics, governance, execution, information sharing, risk management, compliance, confirmation and settlement. The code is an extensive set of guidelines which market participants have been working hard to adhere to. As one of the leading Code of Conduct principles under confirmation and settlement states, “Market Participants are expected to put in place robust, efficient, transparent, and risk-mitigating post-trade processes to promote the predictable, smooth, and timely settlement of transactions in the FX Market.”1 With the increased electronification of FX Spot, Forwards and Non-deliverable Forwards (NDFs) trading moving away from traditional voice trading, the FX landscape is advancing into a new era of transparency.

In 2018, a new FIX Trading Community group, the FX Post-Trade Subgroup was formed with two primary focus areas; 1) standardisation of the new order through to allocation flow, and 2) standardisation with an eye on efficiency for post allocation through to settlement and clearing. The working group includes major buyside and sellside firms who came together in three full-day, face-to-face working sessions at Wellington Management and Goldman Sachs. 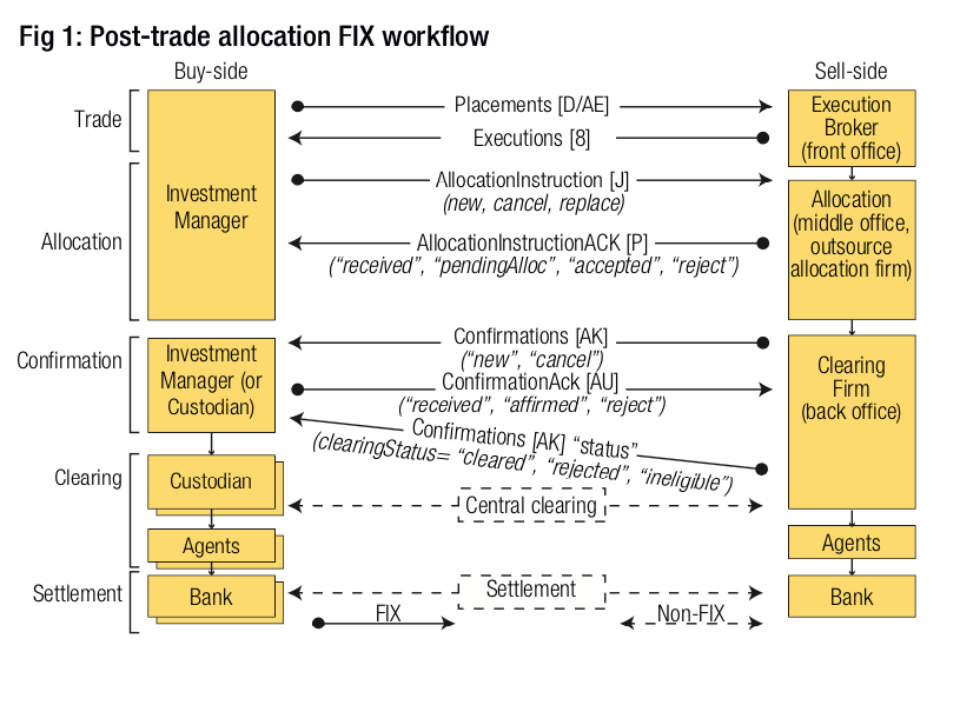 Marquis reported back that, “The outcome of these meetings was a new standardised FX FIX specification taking the best of breed across the industry to standardise and enrich the electronic data exchange. This demonstrates how important and effective it can be for the industry to work together on initiatives that benefit the financial community as a whole. The working session discussions between the buyside to sellside illuminated important operational aspects of trading block FX directly with the dealer community, creating a deeper understanding of the complexities on both sides and resulting in approaches to resolve them. One of these approaches was the introduction of a new message type for trade aggregation.”

The purpose of the FIX Trading Community Post-Trade working group and its subgroups is to define industry practices for common usage of the FIX Protocol for post-trade processing for all asset classes, between the buysides and sellsides, that can be used bi-laterally as well as through intermediary facilities. The FX Post-Trade Subgroup recently released a Post-Trade Processing Recommended Practices document to define the trade workflows for FX spot, Forwards and NDFs. The document defines the workflow from the point of execution to trade aggregation and post-trade allocations. The workflows are defined as bilateral workflows directly between investment managers and bank/brokers.

Of course, improving FX post-trade processes does not come without challenges. When speaking with Lee Saba, FIX Trading Community FX post-trade working group co-chair and Managing Director at Wellington Management, he said how one important gap was, “the time it takes to overcome the process of aggregating the trades which often occurs right after execution but prior to the trade allocation.”

Saba added, “Sellside banks often have to wait for the instructions from the buysides to effectively ‘block up’ the individual trades in order for the allocations to take place.” Buysides have the option to specify their calculated average price for the entire trade aggregation, but Saba also mentioned, “Often this is optional and dependent on whether they are able to run the calculation.”

As soon as the sellside receives an aggregation request this is either accepted or rejected and if rejected this must be resolved manually. Then, the post-trade allocation instructions are provided only after the execution and trade aggregation is completed. At times trades are only partially filled but would still need to go through the allocation process and the remaining unfilled trade will undergo the process again once the trade is executed. Saba concludes, “This illustrates the different loops which are currently taking place that could lead to potential inefficiencies and operational risks.”

See Figure 1 to illustrate the various stages of the post-trade allocation.

There is no doubt in my mind, and many would agree, the industry is faced with the challenge of improving operational efficiencies, adhering to regulatory requirements and reducing risk while operating on bespoke implementations. The new FX Post-Trade FIX specification will bring the industry a long way towards standardisation and will help evolve market participant discussions to more innovative and compelling solutions.

To receive a copy of the FX Post Trade Processing Recommended Practices: www.fixtrading.org/packages/fx-via-fix-recommended-practices.