This extension pack has actually already been published but needed to be republished due to a datatype error in one of the extensions. The new value for RefOrderIDSource(1081) to specify a manual order identifier had been defined as “10”, following the previous values of “0”…”9″. However, the datatype of this field is char and not int. The value was therefore changed to “A”. Apologies for any inconvenience caused by this correction.

Support for order aggregation on execution reports. This extension had originally been designed as a change to the OrderAggregationGrp component in the post-trade area and adding it to the ExecutionReport(35=8) message. This was not possible as the component contains fields that are already part of the ExecutionReport(35=8) message, e.g. OrderID(37). The original proposal to extend OrderAggregationGrp with new fields OrderTime(2836) and OrderOriginationFirmID(2835) was hence rescinded in favor of a more generic solution similar to the repeating groups RelatedTradeGrp and RelatedPositionGrp.

Additional sources for parties to support segregated accounts in the APAC region. The Master SPSA (Master Special Segregated Account) Service is an optional service introduced to facilitate the trading efficiency of the Shanghai and Shenzhen Connect. It requires a number of identifiers for investors and their accounts that are assigned by the central clearing and settlement system(CCASS) of Hong KongExchanges and ClearingLimited (HKEX). This extension adds two new values to PartyIDSource(447) for SPSA and Master SPSA identifiers.

Support for repeating group of timestamps in quote messages. The TrdRegTimestamp component supports one or more timestamps related to trading and/or regulatory reporting. This extension adds the component to the pre-trade area, more specifically to the Quote(35=S) and QuoteStatusReport(35=AI) messages. It also adds the generic QuoteAttributeGrp component to the QuoteStatusReport(35=AI) message.

Additional support for data reporting required by CAT (Consolidated Audit Trail). EP253 already provided a significant number of extensions for CAT. A few of the enhancements proposed by the CAT/FIX mapping were not included in original Extension Pack and are covered with this new extension. They mainly include the addition of existing fields and components and do not add any new fields or components.

In addition to the extensions of the application layer described above, there have also been a number of enhancements for the existing content. Previously, only the global components, i.e. components used in two or more business areas were shown as a diagram with their nested components. This visualization has now been extended to all components throughout the entire specification, for example to show the structure of the repeating group TrdCapRptSideGrp in the post-trade business area: 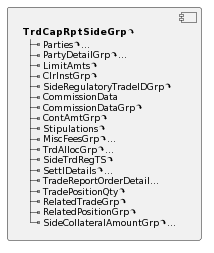